I have again posted about Chudi pooja as I have updated with few photos and information in one post.

Choodi Pooja, is performed during shravan month of every year on Fridays and Sundays by married ladies. A newly married woman performs her first Choodi Pooja in the presence of many elderly women, separately in her husband’s home and her parents' home.

'Choodi'  which means a tied bundle.
The  picture of chudi are mine,from Amma, SILand MIL. 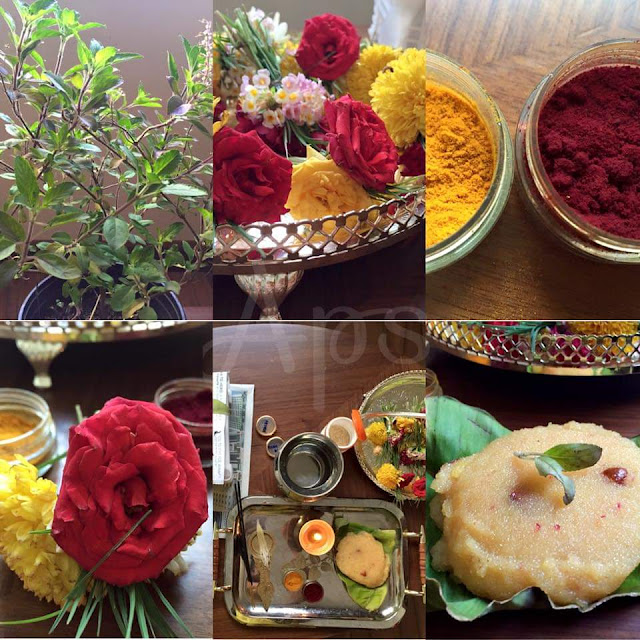 The story behind Choodi pooja goes like this, It is woven around the demon king Jalandhara. His wife Vrinda devi was an embodiment of chastity and fidelity her qualities had prevented the protector of the worlds Maha Vishnu from vanquishing the demon king Jalandhara and break his hegemony over pious people of the world. So Maha Vishnu appears before her in the form of Jalandhara when the demon king had gone out for official engagements.  Maha Vishnu then makes his move and outrages Vrinda’s fidelity towards her husband. Having the last umbrella of protection over Jalandhara  Vishnu later engages him in a war and defeats him and saves the world from falling under the rule of demons. 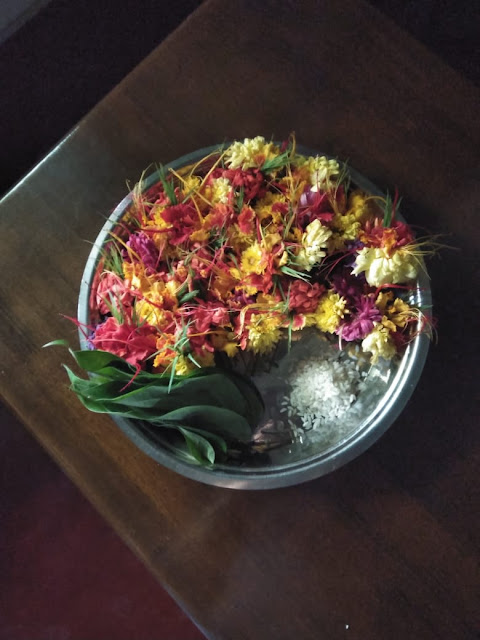 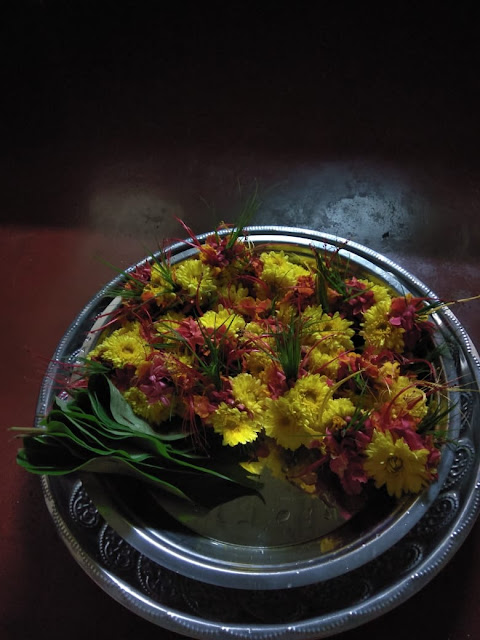 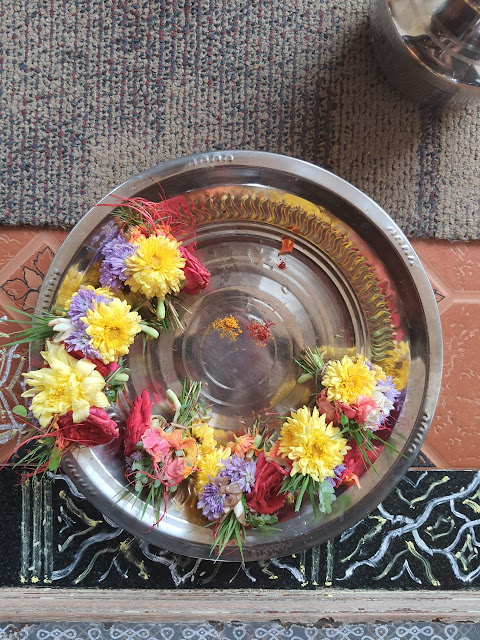 The legend in its later part suggests that the befallen queen of Jalandhara comes to know about the reason behind her husband’s defeat in the war prays to Lord Vishnu and cleanse herself from the sins she had committed by betraying her husband unknowingly. Lord Vishnu suggests her that she should perform Choodi Pooja which features poojas being offered to the Tulsi goddess with different types of flowers and medicinal herbs(total of 11)and a natural fibre from the plantain tree (which is known as vaayu in Konkani) to tie them together and offer it to Tulasi

A women will be dressed up in saree and  arrange her pooja  thali  with -chudi flower,haldi kumkum,little uncooked rice, Prasad for naivedya freshly prepared at home, veedo(arecanut/betel nut piece in betel leaves), insence stick, arti and  a steel  pot filled with water.

A tulsi plant has medicinal properties capable of purifying the surroundings.

The door step (Humboru/Hosthilu) are decorated with chalk designs (Rangoli or Humbraa Chalk). This is how i decorated here with sticker and I have painted a little as if I draw with the chalk there is nothing visible.
First, with a Divvo(lamp) is kept in front of tulsi then,Haldi and Kumkum is applied  to Tulsi as a symbol of womanhood,water is given to the Tulsi plant with tambiyo(small pot)and also consumed by the one offering the pooja (Aachamana), Agarbatti is shown and then the naivedya is offered( any sweet which is prepared at home or any fruit or coconut) (but any thing made of rice is not offered), followed by Soorya Namaskaara(Sun Worship).
Then Chudi is offered to Tulsi and aarati (Flame) is shown to Tulsi. Later, they offer pooja and Choodis to the Door step (Humboru). Finally, all the gods within home are offered similar pooja and Chudis. 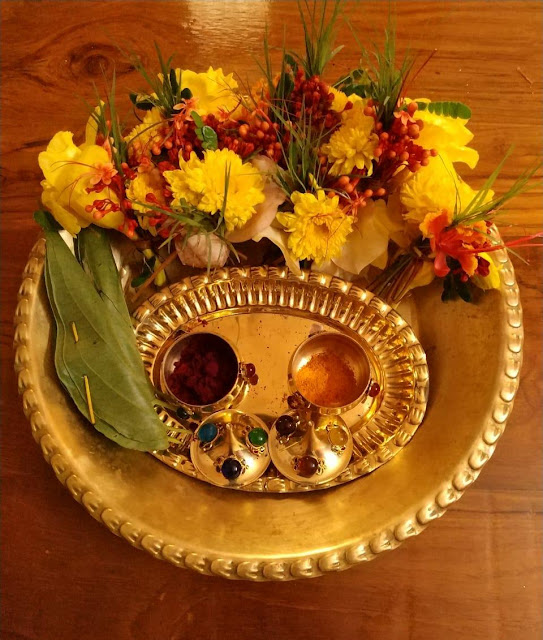 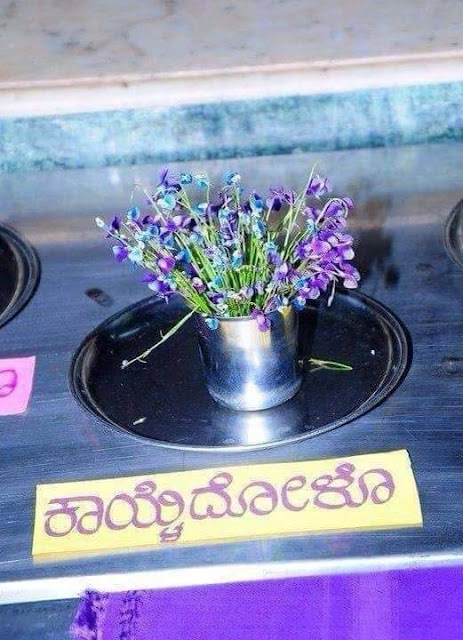 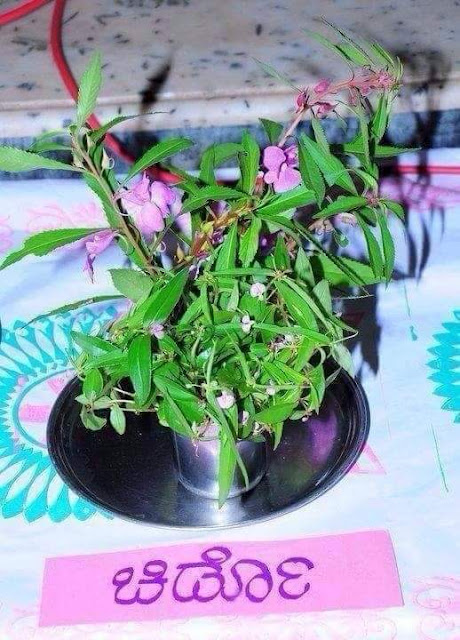 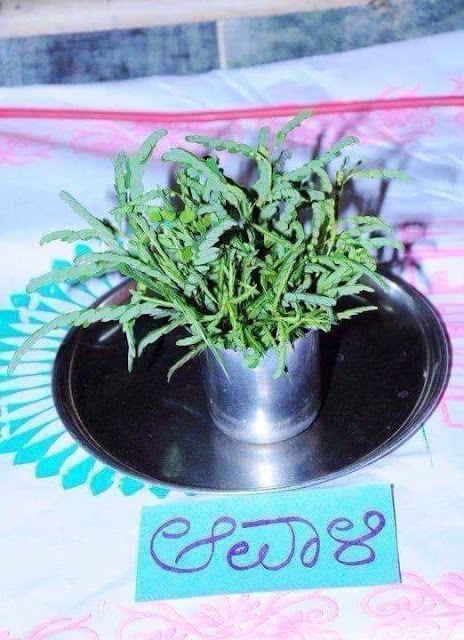 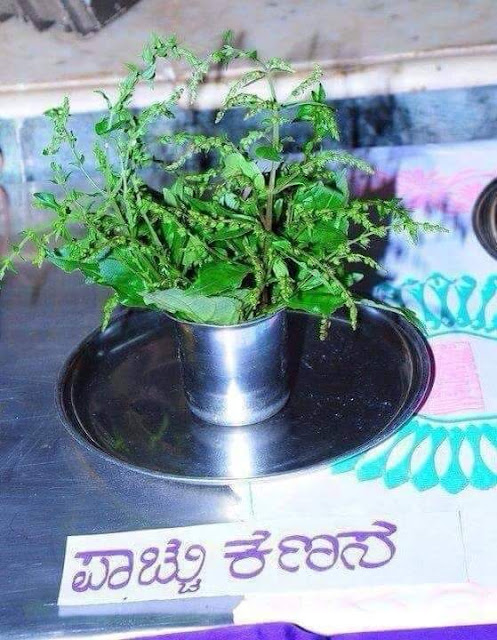 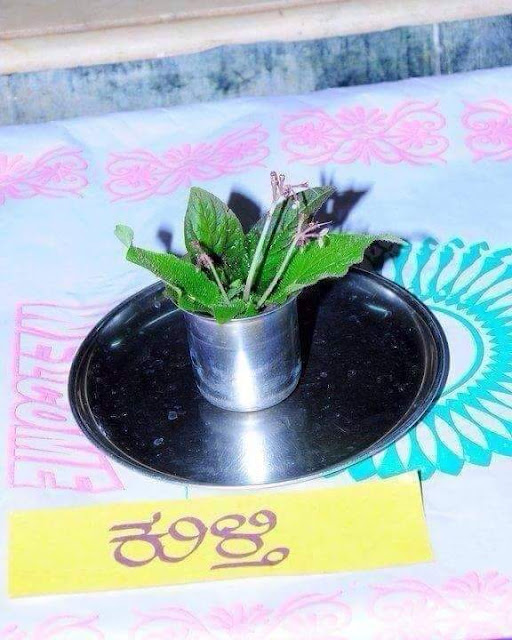 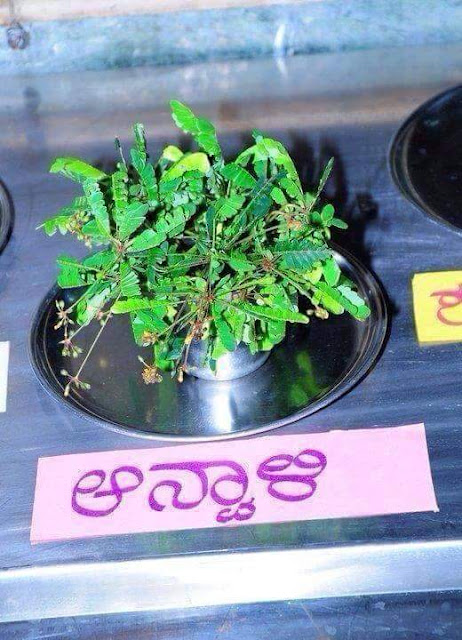 There are no mantras and no shlokas but the married ladies alone can perform this pooja after a fast in the morning. Among the married ladies, those who are close in relation(elders) but far away by location are remembered and a mini-chudi will be sent by mail/post with a little kumkum (which I am going to send to my amma and mayi(mil)). And they will send a similar chudi with their blessings. Thus in the month of Shravan our chudis will cross the seven seas and travel to far off lands
The remaining Chudis are offered to elderly women by the younger ones. They all wear the Chudi in their hair locks. In return, the elders also present a choodi to the younger ones. For the next four weeks or eight days, GSB women will be busy, going from house to house, offering chudis and There is also a custom, that the wife offers the first Chudi to her husband along with a worshipped coconut Veedo (beetle leaves with Arecanut), believed to bring happiness and goodwill for married women and husnabds long life.
Superstition apart, Chudi Pooja is symbolic where a woman feels complete within her married life. This pooja also gives scope for women to keep social contact with their families at least once a year!

Earlier, the flowers were easily available but due to non availability of these flowers the ladies in the Gowd Saraswath Brahmin community do scout for local varieties of flowers. Women make nine chudis and gives it to the other women in her family or locality.

To cater to the present day needs, readymade 'chudis' are now available in the market.

Keerlu Ambade Nonche/ Bamboo shoot and Hog Plums(amtekayi) Pickle  Nonche/Pickle……this word always remembers us about Amma. There r no words to explain how it tastes…… Amma is a great cook I must say. May be it from the starting pickle to the end of a dessert she is just cooks delicious yummy scrumptious….no words to explain. She is so good at taste tht u just give her the dish she tells whts there in it :). Amma prepapres varieties of pickles…. My mouth waters when ever I think of pickles. U kno I still have the pickle amma sent wards with Guru(b4 marriage)… Its almost a yr nd still tastes the same. Any time my hubby calls amma he has to say Mayi ur pickle was awesome….. I still relish it :).    Not only my hubby even my FIL loves Amma’s pickle. Some of our family frenz also ak amma to pack pickles for them nd she does it happily. Ok now after all praises il come down to the recipe. This nonche stays for more than 4-5 months. Actually small ambado or amtekayi is used for this pic

Chudi Pooja and Nagar Panchami Significance with a recipe of Patholi

This is a old post I have made no changes in this and have posted this as it is. I am getting my recipes back here some food pics just as it is some with a new look. Thank You for the support you have shown to Aps Kitchen. I hope you can spare with me and try to read the significance of both the festivals. I have collected it from Many sources like my Mom, Granny and last but not the least Google Aunty. Now for the significane: Tulsi: Tulsi came out of the ocean during Amrita manthan as a younger sister of Lakshmi. She too was devoted to Lord Vishnu and wanted to marry him. But Lakshmi who was already married to him did not like the idea and cursed her to become a plant. Thus the tulsi plant was born. But the all merciful Lord Vishnu took pity and fulfilling her wish declared that when he will be in the form of a saligram she will remain close to him in the form of a tulsi leaf. Therefore even today a saligram will have a tulsi leaf along with it. In front of every GSB home there