God Layi Povu along with the significance of Choodi Pooja

September 01, 2013
As a kid I grew up eating all kind of naivedya items and learnt to make the easy ones soon. This is one such Panchakadayi or panchakajjaya which I learnt to make from my school days. I enjoyed eating it after pooja but my favorite was the sugar based ones.
Today being the last day of Choodi I thought I must not delay in posting this so I am posting the Jaggery (called as God )based panchakadayi/panchakajjaya which I made for Chudi Pooja.
Choodi Pooja, is performed during shravan month of every year on Fridays and Sundays by married ladies. A newly married woman performs her first Choodi Pooja in the presence of many elderly women, separately in her husband’s home and her parents' home.
'Choodi'  which means a tied bundle. The story behind Choodi pooja goes like this, It is woven around the demon king Jalandhara. His wife Vrinda devi was an embodiment of chastity and fidelity her qualities had prevented the protector of the worlds Maha Vishnu from vanquishing the demon king Jalandhara and break his hegemony over pious people of the world. So Maha Vishnu appears before her in the form of Jalandhara when the demon king had gone out for official engagements.  Maha Vishnu then makes his move and outrages Vrinda’s fidelity towards her husband. Having the last umbrella of protection over Jalandhara  Vishnu later engages him in a war and defeats him and saves the world from falling under the rule of demons.

The legend in its later part suggests that the befallen queen of Jalandhara comes to know about the reason behind her husband’s defeat in the war prays to Lord Vishnu and cleanse herself from the sins she had committed by betraying her husband unknowingly. Lord Vishna suggests her that she should perform Choodi Pooja which features poojas being offered to the Tulasi goddess with 11 types of flowers and a natural fibre from the plantain tree  (which is known as vaayu in Konkani) to tie them together and offer it to Tulasi.
A women will be dressed up in saree and  arrange her pooja  thali  with -chudi flower,haldi kumkum,little uncooked rice, Prasad for naivedya freshly prepared at home, veedo(arecanut/betel nut piece in betel leaves), insence stick, arti and  a steel  pot filled with water. 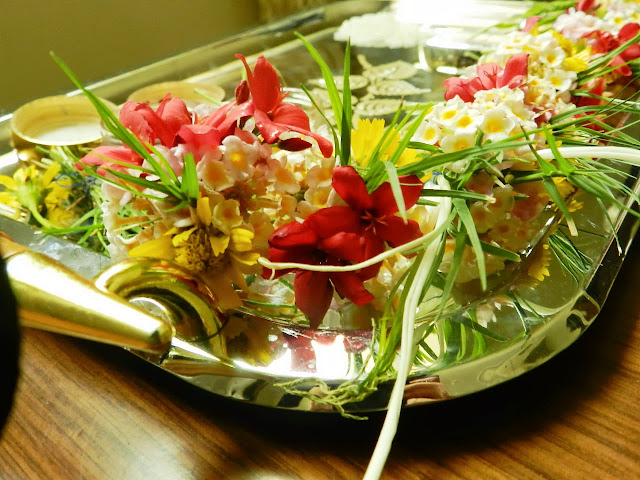 This pictue is of the Choodi's i made here


A standard Choodi requires many flowers and herbs to be collected, as mentioned here -
1. Ratnagandhi
2. Ratha Phool
3. Shevnthe/Sevantige
4. Kaaylya Dolo (Crow's Eye)
5. Anwaali
6. Aarati Phool
7. Kangani Phool
8. Shanka Pushpa
9. Mithaai Phool
10. Majra Nankut( Cat’s Nails)
11. Wild Grass (Dibrankoru)
12. Plantain yarn (Vaayu) for tying.
(Information from dad,amma  and net)
But these days getting all these flowers in city as the mother nature is being troubled in most of the places to build apartments and here getting the basic flowers is a big difficulty so ladies just get the flowers which are available in their place and tie Choodi and perform the pooja accordingly.
With all this explanation lets move on to the recipe for God laayi Povu. 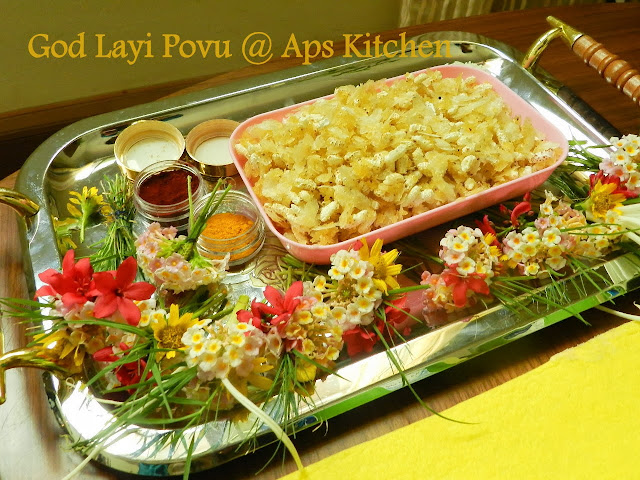 Method:
Heat a pan/kadai , add 1 cup water and the grated jaggery and allow to melt. Once the jaggery has melted and has almost come to once string consistency then add the grated coconut and mix well. Now switch off the flame and allow to cool.
Once the jaggery and coconut mixture has cooled for completely, slowly add in the poha and laayi/aralu/puffed paddy little by little checking the texture of the panchakajjaya, mix well and the green cardamom powder and mix again. 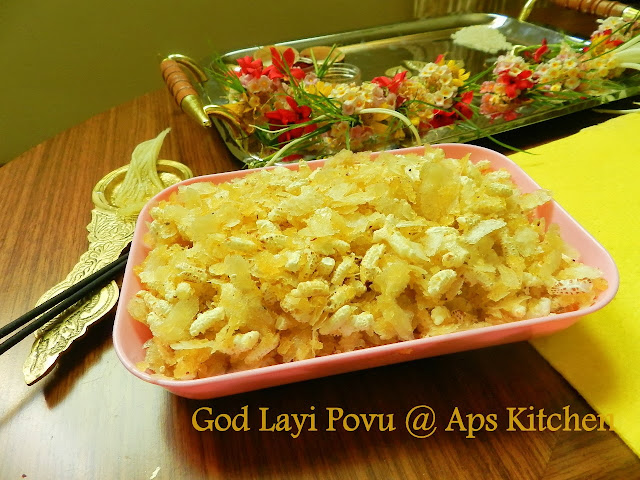 Notes
If the jaggery mixture  is too sticky you may have to add in more of poha to the mixture.
The end result must not stick on to your fingers neither be too dry.
While serving you could mix in ghee and serve and this is totally optional.
Make sure u don’t add too much of water orelse the Paank(jaggery mixture will turn to be runny).
Add the poha first(little by little ) and then the Laayi(puffed paddy).

Serves 4
Let God Bless all of you with Pink of health and wealth,

Unknown said…
I miss my mom and my ajji. But looking at yur pics I feel good and nostalgic. Choodi Pooja was a very significant ceremony at home along with vayana pooja :). Hope you have a good time.
September 1, 2013 at 5:59 PM

Priya Suresh said…
Wow, choodi Pooja, am hearing for the first time and enjoyed reading your post,happy to know more about this pooja..
September 2, 2013 at 8:51 PM

Popular posts from this blog 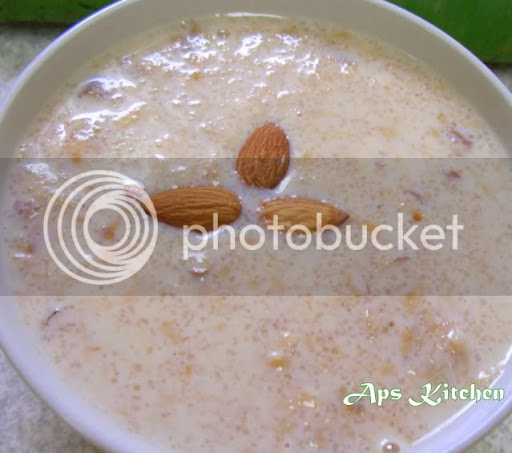 Its just a 4 days for Deepavali… and m sure all are busy preparing sweets and savories for this Deepavali…. I m posting the wishes and a sweet today itself as I may not be able to blog for some time.
Deepavali is the festival of Lights. The word 'Deepavali' is made up of two simple words. 'Deepa' means light and 'Avali' means a row. Hence 'Deepavali' means a row of lights. The festival is associated with many legends and beliefs. One of them is to commemorate the killing of Narakasura, a notorious demon, by Lord Krishna.  Narakasura, because of his previous store of virtue, had been granted a boon at the moment of his death. He asked that his death might ever be, commemorated as a day of feasting. Hence Deepavali is known as 'Naraka Chaturdashi.
So this Deepavali, as you shop for Diyas, ponder upon its flame's spiritual nature. It will not only beautify and brighten your home, but will remind you of the transformations that it is meant to bring wi…
Read more 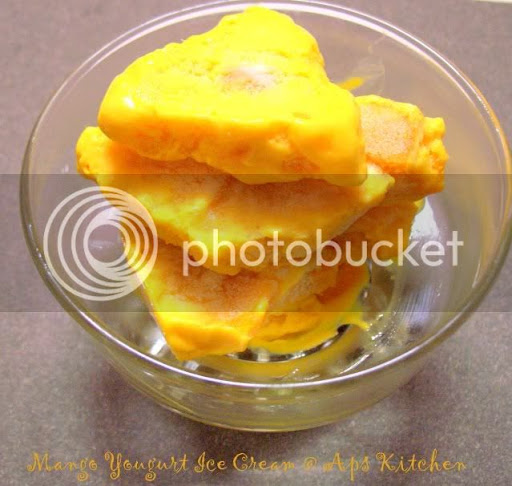 Yeppy I m leading to my 100th post. It feels so so great… I still remember the day I first started my blog…. And had a thought will someone even visit my blog??? My clicks rnt tht good… only 1 follower and blab la… But today I feel so proud to tell I have my own blog ver ppl not only appreciate my work but also try the recipes at home… Now I get mails from friends, relatives or even some who aren’t blogging telling they tried so nd so recipe nd it had turned out Yum….
It really feels great when someone appreciates ur work…. And when there is someone to cherish on the food we make and give suggestions to what more to add or wht variation can I add…. Nd all this credit goes to My Dear hubby!!!!!! Thank U
So how about celebrating this with a Ice Cream….How about the same ice cream Mango yogurt??? This was the first time I gave a try nd it was so yum…
I love ♥ Mango in any form and I loved the Mango yogurt ice cream by London Dairy…. It is so yum tht every single bite melts In the mo…
Read more 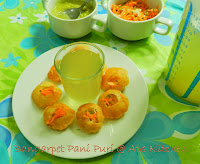 Hello all, hope u had a great weekend we to did... infact its the 2nd day of the week for us and we r waiting for the weekend eagerly as its celebration time for us J.
Some food pictures attract one so much that you feel like eating it right away. Same did this picture do to me! I wanted to gulp it right away but there was no way that I could get it anywhere here or make it the moment I saw. So I had to wait for a day and made it the very next day. I kept all the things ready in the morning so that I don’t miss a single thing. But I had a few doubt’s which Prathibha cleared the very moment I asked her.
Thank U Prathy for the recipe as well as guiding me when I was in a doubt.
It was so yum that I we(even my lil one) could not resist eating it. I made puri’s also at home as we could have as much as we want and my little one also was eating them, I wanted to make it at home healthy and fresh.
We finish off the whole batch of puri’s and pani too ;) I know you may think crazy people but …
Read more